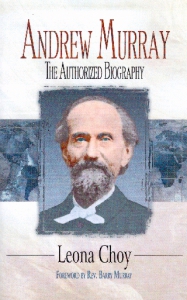 This is the intimate story of a missionary statesman, author of more than 200 Christian classics, and his wife Emma who shared his heart and ministry. His name is a byword among those who seek a deeper, closer walk with God.

Researching new material obtained from the Murray family archives and descendants in South Africa, Leona introduces you to the flesh and blood man of laughter, ready wit and humor behind those popular Christian books.  It may surprise us that this writer of such serious spiritual books was a tender, loving husband and devoted father. He lived transparently what he preached and wrote. This book helps the reader to identify with the human sides and struggles of Andrew and Emma.

For the first time, readers will meet Emma, Andrew's “new idea of a wife” as he called her. He claimed that  without her he could never have accomplished his literary efforts. Leona discovered heretofore unknown and fascinating details about Andrew's wife from out-of-print books, journals and family letters compiled by their granddaughter, Joyce Murray, who freely shared them with Leona.

Daily life of an English girl growing up in mid-Victorian Cape Town in the 1850s comes alive with human interest and humorous anecdotes. We experience with Andrew and Emma their whirlwind romance, covered wagon honeymoon, and first years of marriage in a primitive wilderness parish. We smile at Emma's naive, newlywed views on child rearing until she became a mother herself.

This was a man who prayed all his life for revival and then didn't recognize and tried to suppress the move of the Spirit when it began happening in his own church—until he himself had an encounter with the Holy Spirit.

This was the conservative Dutch Reformed Church Moderator who experienced divine healing after he was told by doctors that he would never preach again. Healing became a part of his ministry thereafter.

Lack of power in his early ministry resulted in his near breakdown physically—until he learned “the full blessing of Pentecost,” as he termed it.

Here is the man who wrote the classic book Humility confessing that he fought pride and prominence as his lifelong enemies.

This was a young minister who started his honeymoon arguing with his new bride about taking her grand piano and fragile china dishes by ox cart to their distant wilderness pioneer parish since they would have to ford swift rivers en route.

Without typewriters, computers, or recording equipment, and while raising eight children, Emma wrote down Andrew's prolific messages. Together they accomplished the writing of over 240 books and booklets published in 15 languages during their nearly fifty years of marriage.

Murray admits to being too early famous, a boy preacher to whose meetings admiring crowds flocked, with conversions at every evangelistic service.  As God matured this servant of God, he was eager to share the truths he found with his congregation and readers.

Why is this biography labeled “Authorized”?  For this fast-paced historical saga Leona used primary and authorized sources through correspondence with the Murray Family Association in South Africa.  A section of exclusive archival photos in the book was supplied by the Murray Family Museum and Centre in South Africa enriching this biography. The ample Appendix provides a synopses, dates, and backgrounds of most of Murray books in print at the time of the writing of this biography. Each is cross-referenced to chapters chronicling events in his life.

A Murray Family Register of immediate descendants, a Foreword by a direct Murray descendant, and contemporary testimonies from South Africa add to the value of this biography. The Epilogue by another descendant gives current at the time news about Murray reunions and family highlights.

Born in South Africa, the son of a Dutch Reformed pastor from Scotland, Murray studied in Scotland, Holland, and Germany before returning to South Africa. He traveled to England, the Continent, and America, preaching in prestigious pulpits and Keswick conferences influencing his generation for Christ.  Murray was an educator and professor as well as a missionary statesman and evangelist. A friend of D.L. Moody and other prominent leaders who were instrumental in the Keswick movement, he directed the South African Keswick for many years.

This 268 page book is a new edition and new title by a different publisher. This book replaces the former titles: ANDREW MURRAY: An Intimate Portrait of His Marriage and Ministry, and ANDREW AND EMMA MURRAY, which in turn replaces the original title: ANDREW MURRAY: Apostle of Abiding Love. Note: The contents of the book remained unchanged regardless of the change in titles and publishers.

After more than two centuries, Murray's writings are still guiding believers throughout the world to follow Christ more closely. Many of his books are reprinted today and continue to be popular with each succeeding generation. He had an anointed pen because he had an anointed heart.

$12.95 plus S/H Order directly from the publisher, CLC not Leona