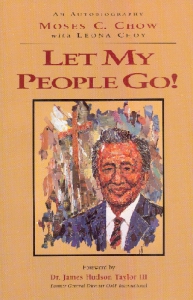 A seven year old boy in China was given the biblical name “Moses” by his newly converted Christian father the night of the Chow family “exodus” from their Taoist and Buddhist family circle.

His father prayed, “God, use my only son to lead our people in some way out of spiritual bondage and slavery.”

A Buddhist monk predicted that Moses would die before the age of ten, but God had a different plan. Early in life, Moses answered God's call to preach the gospel. Many wilderness and desert experiences like the biblical Moses lay ahead of the young man.

Dr. James Hudson Taylor III, Former General Director of the Overseas Missionary Fellowship Intl. wrote in the Foreword: “This book is an amazing testimony. It gives the reader a vivid picture of the growing church in China during early missionary days, and especially of a young Chinese Christian caught up in catastrophic wars and social upheaval.

“It is also an epic account of Chinese Christians in suffering and scattering as they find a new and abiding identity in Christ. Here are important insights into the influence of Christian parents and spiritual mentors on young people in the home and church.”

God called Moses Chow not only to evangelize his kinsmen around the world but to pursue cross-cultural missions in Indonesia, Japan, Hong Kong and the United States. He is one of the founders of Ambassadors For Christ, Inc., a ministry among Chinese university students and professionals in North America. Moses traces the beginnings and development of the Chinese student movement in North America to which he devoted nearly 30 years.

His vision helped launch AFC's triennial Chinese Mission Conventions, one of the largest Urbana-like mission conferences the Chinese Church has ever known. They are designed to challenge young Chinese Christians to become involved in worldwide missions.

A lifetime burden for China and a love for his kinsmen in the flesh burned in Moses' heart. He vividly describes his feelings on his first return after more than 30 years to his childhood city of Ningpo, China in 1979. He was still unable to preach freely because of Communist restrictions.

Sixteen years later, God brought him full circle to preach the gospel openly to thousands of his own countrymen in the same location. He had the unique opportunity to publicly call China's youth to dedicate themselves to serve God. An unprecedented 100 young people still living under the restrictive Communist regime responded openly in one meeting.

Moses declared, “I am not Moses the deliverer. God is the Deliverer. God is at work to emancipate from sin and to use Chinese Christians all over the world as a spiritual force to fulfill His purposes. I only follow Moses' example and testify from my personal experience what God has done.”

This book must be ordered directly from Ambassadors For Christ, Inc. afcinc.org. not through Leona.