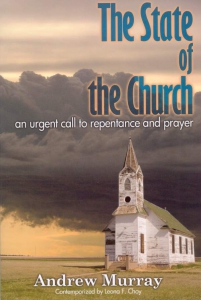 
THE STATE OF THE CHURCH

This challenging treatise on the revitalizing of the church worldwide for its ministry of intercession and thus completing the Great Commission of our Lord grew out of another World Missionary Conference, this time in Edinburgh, Scotland in 1911. It speaks just as vividly to our modern day church situation and its spiritual needs.

Murray wrote this book when he was 83, after a lifetime of pastoral experience, evangelistic work, church administration, missionary and church planting work and educational and institutional involvement. He was in a mature position to speak and write on this subject from a wide perspective.

He wrote of the decline of spiritual vitality and commitment in churches. He explained that he was not belittling the church by such a diagnosis, no more than a surgeon's announcement to a husband about his wife's deadly disease and the need for immediate surgery would be a disparagement of her.

Murray maintained that the state of the individual believer within the church lay at the heart of the problem. His conviction was that "the church of today, as a whole, is suffering from the lack of one thing only, the heavenly enduement of power which made the whole apostolic church triumphant--the Pentecostal Spirit." And this from the most prominent administrator of the Dutch Reformed Church of South Africa!

If the "home church" lacks spiritual vitality and power, its outreach to the world will be weak and fizzle out, Murray believed. Moreover, "Nothing is so revealing of a defective spiritual life in minister and congregation as the lack of believing and unceasing prayer."

When Murray was only a few years from finishing his earthly journey, well into his eighties, preparing for bed one night he had a copy of this very book under his arm. Showing it to his family he said, "Many a minister or other friends have told me, 'I have read that book.' Yes, they may have read it through and then put it on their study shelves among other books. Now I myself have written that book, and yet I have to read it and reread it so that I may be able to take in the true state of the church and be suitably moved to prayer for it."

Both this volume and his The Key to Missionary Problem were recognized by leaders of the Christian church of that day as more than mere publications; their issue constituted events in the history of the church of their day which would continue to be significant for generations to come--even to our modern cyberspace generation.

Leona Choy has simplified the syntax of this famous 19th century writer while retaining his style and flavor. She makes it easier for the reader to follow his thoughts through shorter sentences and paragraphs, while not eliminating any of his points and content.