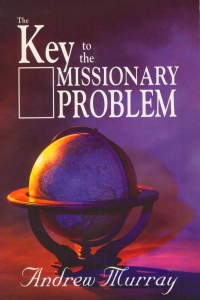 
THE KEY TO THE MISSIONARY PROBLEM

Dr. Andrew Murray, the famous author on the deeper life in Christ of a past century, shares his insights concerning spiritual strategies for world evangelization and where the church (in his day and ours) is still missing the mark.

Having been invited by the noted evangelist D.L. Moody to the first major evangelical conference on missions in New York in 1900, Murray was unable to attend because of his pastoral duties in his various parishes in South Africa. Nevertheless, he prayed and pondered what he would have said had he been able to address that important group of strategists.

Murray was afraid that the gathering would somehow miss the point which he felt was the most critical: How could the church worldwide be aroused to know and to do our Lord's will for the salvation of men? After the missions conference, Moody sent him the two volumes of reports. Those convinced him that they had, indeed, missed “the key to the missionary problem.”

This book was the result. Murray wrote as completely as he could what he felt was neglected and critical to the advancement of missions to all nations.  His words, solidly Bible based, are a burning summons to action. He wrote the book with great intensity, sounding forth a rousing and solemn call to new activity, fresh consecration, and more earnest prayer for the cause of missions.

Andrew Murray deals intelligently, knowledgeably and spiritually with the important issues of missions set in their historical perspective and in the context of the Church worldwide. Since Dr. Murray is best known for his devotional writings, it may seem incongruous to some that he addressed himself so strongly and intelligently on foreign missions. But the connection will be understood upon reading the book. He speaks relevantly and his message is not dated, visionary, or impractical for our multi-media, high tech, sophisticated missionary enterprise of today. Murray dares to call his thoughts the “key” to the problem. Is it a rusty key? Does it fit our generation? Let the reader be the judge.

Leona Choy has simplified the syntax of this famous 19th century writer while retaining his style and flavor.  She makes it easier for the reader to follow his thoughts by shortening sentences and paragraphs while not eliminating any of his points and content. Leona providentially rediscovered this book in the archives of a seminary library during research for her contemporary biography of Andrew Murray which she authored. The book had never been published in the United States and had dropped out of print until this volume was reprinted. In Murray's day it had literally exploded on the Christian world when it was first issued and was used by the Lord to stimulate missionary zeal and action in many countries.

See other books by Andrew Murray contemporized by Leona Choy published by CLC Publishers: The State of the Church and The Inner Chamber.

All three books can be ordered directly from CLC. since Leona does not carry stock.