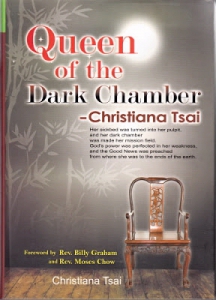 QUEEN OF THE DARK CHAMBER - Three Books In One
Author: Christiana Tsai


The collected writings of CHRISTIANA TSAI, all three of her books collected in one book, are now available in one new book with an attractive cover of artistic quality!

This firsthand missionary biography is a cross-generational and cross-cultural page turner that is sure to appeal to readers of any age. It is a first person account of faithful missionary work in China in the early years and in the beginnings of preaching and witness involvement by Chinese believers themselves. Christiana Tsai was a beloved and noted pioneer in this endeavor, one of the first Chinese women to receive a Western education.

Leona's name is not on the cover as the author. Did she write this book or not? Let's ask her.

Leona replies: Yes and No. It was my great joy and privilege to be the invisible "ghost writer" behind the scenes to collaborate with Christiana on two of the three books in this new volume. So my name is rightfully not on the cover.

Christiana asked me to "write in her voice and style" as she recollected and shared with me what she wanted to convey to readers of her conversion and worldwide witness for the Lord. Since we wrote her books first in English, which was Christiana's second language, they were translated only later into Chinese and dozens of other languages.

She was a loving but merciless and meticulous editor (perfectionist!) insisting that we literally "pray and weigh" each sentence until she was satisfied that it was the best way she wanted to express it. I would bring her draft after draft for editing. Some of the writing was still done in pre-computer days. That experience was invaluable to launch me into my own writing career!

The first book in this collection, the flagship book QUEEN OF THE DARK CHAMBER, chronicled Christiana's life from her birth in 1890 to a wealthy, politically prominent family in the last days of the Manchu Dynasty. The book ends in 1949 at which time she fled the war and chaos in China with her lifelong friend missionary "China Mary" Leaman whom she called her godmother.

Christiana would live the rest of her life as an invalid in the historic Leaman homestead in Paradise, Pennsylvania. First published in 1953, that book was "as told to" by Ellen Drummond, a missionary friend who knew Christiana in China and witnessed many of the events firsthand.

Billy Graham personally recommended her book: "In her furnace of affliction Miss Tsai has discovered the secret of spiritual refining. In her dark chamber of infirmity she has found the Light of the world."

I assisted her in writing the second book in this collection, a chronological sequel, which the publisher simply titled CHRISTIANA TSAI. We worked in her darkened bedroom necessitated by her illness which made her eyes light sensitive and her lack of balance confined her to bed for nearly fifty years. She narrated to me the events of her life from 1949 until her death in 1984 even while the continuing drama of her life and exciting ministry was still unfolding around her.

It was at that time that the Leaman family and Christiana deeded their farmland property in Paradise, PA to Ambassadors For Christ, Inc. for their headquarters and expanding ministry among Chinese students and professionals on university campuses in North America and abroad.

In the third book in this volume, JEWELS FROM THE QUEEN, Christiana asked me to compile short illustrations from the many messages she preached from her bed as a pulpit. A flood of people from all over the world sought her out after they read her first book which was translated into dozens of languages and versions including Braille.

When you read this intimate memoir it will touch your heart and inspire you to greater trust in God through the life example of Christiana. You will want copies for your family and friends and church library and to recommend to your book club.

Leona doesn't carry stock of this book. Order directly from the publisher: Ambassadors For Christ, Inc. Go to www.afcinc.org. and follow instructions.  This 446 page book is available either in Chinese or English versions and is packed with photographs and art work.