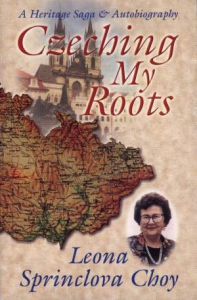 A Heritage Saga and Autobiography

Leona was born during the Great Depression and grew up in the 1930s and '40s. She was immersed in Czech culture and customs in Cedar Rapids, Iowa although she rebelled against being identified with a minority culture. As her life unfolded, she spent a lifetime as far away from her heritage as she could—in China!

She was, however, positively influenced for a lifetime by her precious, live-in Czech grandmother who was a devoted Christian but spoke no English.  She finally embraced her ethnicity later in  life, searched diligently for her roots, and discovered relatives and exciting adventures in the Czech Republic.

Leona researched her rich religious heritage back to the martyr, Jan Hus, and the Moravian missionary movement. She journeyed to those scenes in history in her later years.

Leona has written a legacy book most of us wish we could write to pass on to our own heritage. Her fast-paced narrative gives the reader a you are there sense of the perilous 19th century voyage of her ancestors to America in steerage class and the Ellis Island arrival experience of Czechs and other immigrants.

She follows her ancestors as they settled in cornfield country in the late 1800s and early 1900s. Her research into life in Iowa from the days of the Indians through World War II is well-documented, interwoven with experiences of her own relatives.

The author has done her homework on the socio-political-economic background of the Czechs which caused them to leave their homeland for an uncertain life in the New World. Her chapter on “Czeching Out the Czechs” is historically thorough all the way back to the Celts who spread to Moravia and Slovakia during the 4th century B.C. She traces the courageous Czech people and their national upheavals through centuries of subjugation by neighboring armies, the Austro-Hungarian era, establishment of their democracy, the Hitler and the Russian occupations, the “Velvet Revolution” and the “Velvet Divorce” to the present Czech Republic.

Leona paints a vivid picture of the specific villages, towns, and regions of Moravia and Bohemia from which not only her families originated, but which are the birthplaces of multiplied thousands of Iowa, Nebraska, and other heartland Czech settlers. Leona takes you there with her, whether or not you have the opportunity to go yourself.

Her slice-of-life descriptions of how Iowa Czechs sought to perpetuate their heritage through festivals and cultural events is enlightening. Readers who grew up in the '30s and '40s will relate to her graphic childhood and teenage memories of close-knit neighborhoods and simple life before television and computers.

In telling her own story, Leona is candid, straightforward, and vulnerable but always genuine as she reveals her own struggles, feelings, failures, and dreams. She found her purpose and passion and followed it. Going against the tide of convention, she married a Chinese ministerial student whom she met in college. She sailed away with him literally “on a slow boat to China” for a cross-cultural, adventuresome life as a missionary and educator.

The mother of four sons, her “Chinese Czechers,” now grandmother of ten and at this writing, a great-grandmother of thirteen, she pursued an active life of mission work overseas and in the U.S. to become a writer and publisher, co-founder of a mission organization, and president of a radio station. Her stories of more than a dozen trips into China and extensive travels throughout the world leave the reader breathless.

Intimate accounts of her cancer survival and widowhood are deeply moving. Leona's Christian faith and optimism shine through as she eagerly and diligently passes on her heritage to her own posterity. She inspires readers to consider leaving a legacy of their own.

Her concluding chapter, “Living on the Summit,” is a classic of accumulated wisdom, perspective, and philosophy of life as Leona shares what God has taught her. Her tale is sprinkled with anecdotes, human interest, dialogue, humor, her original poetry, and nostalgic recollections many readers will relate to.

Even if you are not in the habit of reading Introductions and Prefaces, you won't want to skip the ones in this book. They are a powerful launching pad for her story. Her Picture Gallery and abundant list of Resources are a meaningful inclusion.

In her published biography of her husband Ted, My Dreams and Visions, she goes into greater detail about their exciting life together in China, but this book, her 31st at the time of her writing, is uniquely her own story.

Who will want to order CZECHING MY ROOTS?

Everyone who knows Leona or her family. Everyone who has a smidgen of Czech blood in their veins—and their children and grandchildren and spouses. You need to know your cultural heritage and Leona has done your homework for you. It will interest people born or raised in the heartland of America irrespective of ethnic origin. Also those whose parents or grandparents came from that region or that period.

This is a book for people interested in Christianity, mission work, and China.  And for anyone who has struggled with personal identity or with being part of an ethnic or cultural minority. Everyone who likes to read a can't-put-it-down autobiography will want a copy!