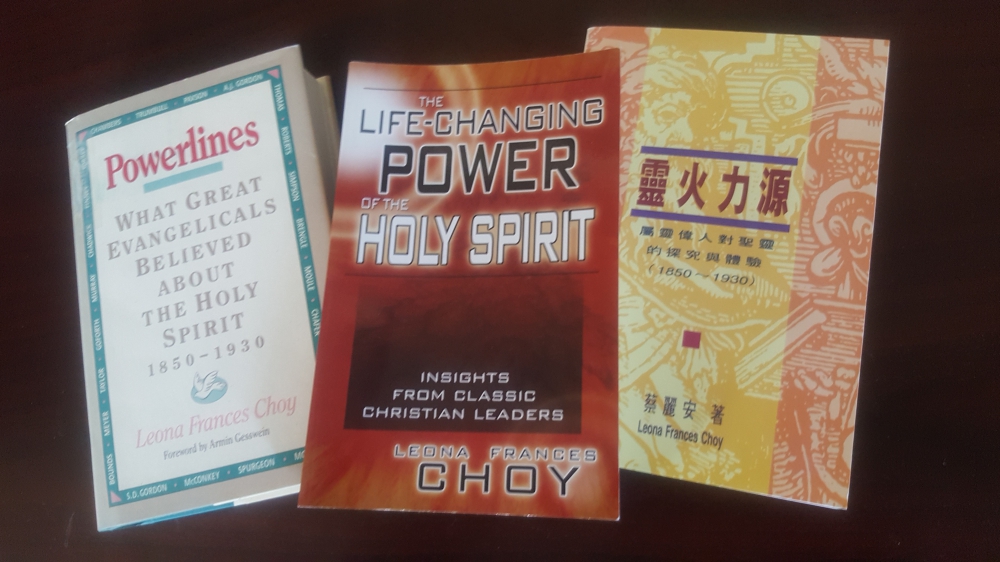 (Originally published under the title POWERLINES for the first edition

INTERVIEWS about the Holy Spirit

of the 19th and mid-20th Centuries

“This easy-to-read, fast-paced book is a grand symposium of great Christian leaders from the past, a roster of spiritual saints—some of them giants—all on the first team who would be saints in any denomination, and who, by their lives and spiritual depth still speak today—with the help of author, Leona Choy,” wrote Armin R. Gesswein, Founder of Revival Prayer Fellowship.

This 321 page book was recommended by Dr. Chuck Swindoll on his Insight For Living radio program as one of his valued resources for teachings about the Holy Spirit.

INTERVIEW WITH THE AUTHOR

ABOUT HER CLASSIC INTERVIEWS

Leona, what is this book all about?

Many of us have wanted to meet and ask questions of certain giants of the Christian faith who lived in the past. I set upon a quest to do so and to share my discoveries. In this book I invite the reader on a virtual journey through the time tunnel of the past century or two. I found that these prominent Christian leaders were eager to tell their own generation about the source of spiritual power in their experience, teaching and ministry. Then I “asked” them to share their open secrets with our generation. That's the theme of this book.

Was this easy to do?

On the contrary, it was painstaking and tedious and a lengthy discipline but at the same time exhilarating and joyful. Several giants made me dig hard for their priceless answers from the deep mines of theological seminary archives and second-hand bookstores. Others wrote volumes on the subject and their gold lay closer to the surface. I discovered that some of them knew each other and laterally influenced each other. Their answers complemented and supplemented aspects of the subject because the same Holy Spirit was moving in them and among them.

Why did you chose this unique interview format for a historical classic and how does it work?

The format of this book is similar to a modern radio or TV talk show but more structured in order to be accurate. As the “host,” I introduce our “guest” in each chapter and let you know in what year our interview is taking place. Then I deliberately ask corresponding questions of each interviewee to provide the reader with an unbiased and comprehensive perspective on the theme of our interview.

How could you claim to have “interviewed” these prominent persons since they have all passed on to their reward?

My extensive Bibliography of 88 books and resources is the key. I researched prime sources, memoirs, autobiographies, biographies and their own expository writings and sermons. I allow each to “tell” their own story of how he or she entered upon the Spirit-filled life. Of course I had to be selective. They “told” me far more than I had space to share even about our chosen subject. Were I to have used footnotes, the reader would have been needlessly distracted. This book would have turned into an academic exercise rather than a user-friendly, inspiring volume. I invite the reader to trust my integrity.

Who are in this book's roster of men and women interviewed?

Why do some prominent Christian leaders of the recent past centuries seem to be missing?

I selected the individuals above from a long list of notable possibilities, picking out people generally well-known in evangelical church history. Certain others, although prominent, either didn't write books or didn't address the particular teaching about the Holy Spirit in their writings.

Why did you cut-off your interviews at the turn of the 20th century?

I deliberately “interviewed” prominent persons who lived, or at least “answered” me before the founding of the Pentecostal denominations. This is significant. These men and women were obviously not part of that movement nor of the Charismatic renewal as we know it after that point. These movements didn't exist as movements yet. When these leaders speak of “the baptism of the Spirit,” they are doing so in the context of their own understanding, experience, and interpretation of certain biblical passages.

How did you determine which questions to ask?

I've “asked” the right questions by doing “reverse engineering”—I based my questions on what they wrote. I asked only the questions I was sure they had addressed in their writings. Each interview took whatever direction the interviewee determined from his or her writings.

Did you paraphrase their “answers” or put words in their mouths?

No, I quoted them as close as possible to verbatim in context from their books. The most I did was to slightly contemporize some of their outdated syntax and lengthy, involved, multi-punctuated sentences rather than allow ponderous word-for-word quotes. Flourished syntax was a much admired style in their times. Unfortunately, that tends to confuse modern readers. I tried to do my homework well. I was careful to retain the original flavor, style and phraseology of these men and women of faith.

What do you mean when you invite the reader to “enjoy the atmosphere of their era?”

Visualize yourself walking in their shoes. Smile when they speak of the “rush and hurry of life”--they only traveled by horse and carriage! Some complained about “these evil and Satanic days” over a hundred years ago. They used examples of steam-driven engines and trolley cars—many pre-dated the automobile and airplanes. All lived before atomic or nuclear power and men walking on the moon. But none lived without the power of the Holy Spirit being available to them.

Were these giants of the faith accepted by their own generation when they taught about the Holy Spirit?

If we were transplanted into the times of some of these men and women, our reactions might have been the same as their contemporaries—some accepted and some doubted. Likewise in the time of Jesus. Would we have been among the convinced or the doubters? How would D.L. Moody's “uncouth appearance and country bumpkin preaching style” have affected our acceptance of his message? Would we have looked down upon Evan Roberts' youth and lack of training? His evangelistic band was composed of enthusiastic “kids” in their teens and early twenties. Would we have criticized Hannah Smith because she was a “woman preacher”?

Their answers do differ from each other in expressing the deeper experience with the Holy Spirit.

True. This book does represents a panorama of individual views. It is not a debate. We need to appreciate that each spiritual leader described the same precious jewel from a distinctly personal aspect. Their differing, brilliant flashes of insight in explaining their intimate experience help us to see how the Holy Spirit adapts to each of us uniquely. Each facet provides us with a fuller revelation of the creative, varied ministry of the Spirit in the world expressed through the ages.

What is your intention in offering such different views on this vital teaching?

My purpose is to offer authentic historical information of the views about the Holy Spirit from various noted Christian leaders of the recent past. It is not biased toward a particular position nor does it persuade toward any particular doctrinal position. At the same time we hope that its powerful message draws the reader to desire more of the Holy Spirit for living and witness, as each of the Spirit-empowered individuals expressed in this book.

Did you have a personal reason to be interested in the writings of these great men and women of the faith?

Half of these personages were still living when I was born. As a teenage Christian I grew up reading their writings about the Holy Spirit which were popular in Christian circles during the mid-20th century in America. When I was 15 I discovered the deeper life writings of Andrew Murray and in my mature years I had the privilege and opportunity of writing Murray's “Authorized Biography” with new sources gathered from his descendants in South Africa.

What might you expect a perceptive reader of this book to conclude about the Holy Spirit's moving in our present age?

God is looking for “powerlines” in every generation. Each age has its open-hearted, seeking believers who are willing to boldly press on with the Holy Spirit in uncharted ways. God is always drawing His children deeper, closer to Him. Through the power of the Holy Spirit He wants to get on with transforming God's children into the image of Jesus, the perfecting of the saints, the nourishing of the Bride, the completion of the Church—which usually means waking the Church from her sleep. Revivals, renewals, restorations, times of spiritual refreshing, intense movements of the Holy Spirit—personal and collective—are among God's ways to rouse His Church.