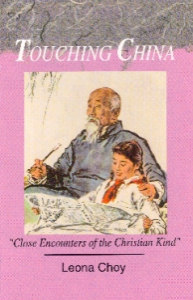 When my husband Ted and I graduated from Wheaton College in Illinois in 1947 we sailed for China to fulfill our call from the Lord to witness to the Chinese people there.

However, upon arriving in Hong Kong we encountered the flood of thousands of Christian missionaries being forced out of China by the atheistic Communist government. Instead of being able to enter inland China, we had to remain and serve God in what was then British occupied Hong Kong. My husband pastored a large church newly built during our tenure there for six years. We moved later to Singapore where Ted taught in the Singapore Theological Seminary.

Upon return to the U.S. due to the death of my father and the care of my mother who was in poor health, we served for decades among Chinese students and professionals on American university campuses in a ministry of Bible classes, conferences, church planting and other means of reaching them for Christ and discipling them.

All this to say that for the next more than 30 years we were not permitted to enter China for Christian witness. Eventually came a breakthrough with the death of Chairman Mao, the leader of Communist China, and a slight thawing of relations with the West. The door opened enough to allow joint ventures in business, opportunities to teach in China's institutions, especially English.  Travel for tourism surprisingly became possible.

Finally we were able to enter China! I took advantage of the tourism aspect and became a tour escort to accompany about a half dozen American Christian tour groups to China during a ten year period. During that decade Ted and I also made a number of quiet, unpublicized lengthy journeys throughout China to help the underground Christians with Bibles and teaching materials.

At last Ted had opportunities to preach in urban centers, villages, and countryside gatherings to fulfill his call to his countrymen who had suffered such great persecution in China proper.

This book was the result of those China encounters as I recorded firsthand insights about the explosive growth of the church in China, lifestyles of Chinese people as they are since China opened in contrast to what they experienced when the bamboo curtain effectively closed the door to the West.

I combine extensive research into a summary of China's ancient history and its new tensions of dealing with the West—a contest of ideologies. Although China is continually changing and today's China is no longer the same as when I wrote this book, the documentation and history of that era is still valid and helpful to our understanding of the multi-faceted and complex situation in modern China.

I packed into its 340 pages as much material and insights as offered in an academic course on China but presented it in a user-friendly fashion. The information I added to the Back of the Book section includes useful phrases of the Chinese language and glossary of terms is icing on the cake. I introduce the 25 chapters with outstanding original artwork by Chinese artists which I obtained in China.

The opportunities for ordinary American Christians to travel and teach in China is wide open at this time, albeit China should be approached with wisdom and understanding. I explain the opportunities we have to influence China through friendship evangelism with Chinese students on our campuses today.